Image 1: Polished diamonds that we stock in our inventory


Most natural diamonds are aged between 1 billion and 3.5 billion years. Surprisingly, diamonds share some common characteristics with coal. Both are made up of the most common substance on earth: carbon. What makes diamonds different from coal is the way that the carbon atoms are arranged and how the carbon is formed. Diamonds are created when carbon is subjected to the extremely high pressures and temperatures found in the earth’s lithosphere, which lies approximately 150-250 kilometres below the earth’s surface, although some diamonds have come from as deep as 800 kilometres. Much more recently (tens to hundreds of millions of years ago), they were carried to the surface in volcanic eruptions and deposited in igneous rocks known as kimberlites and lamproites. They can also be found in alluvial deposits. From here, once a large enough deposit of diamonds has been discovered, it is mined. 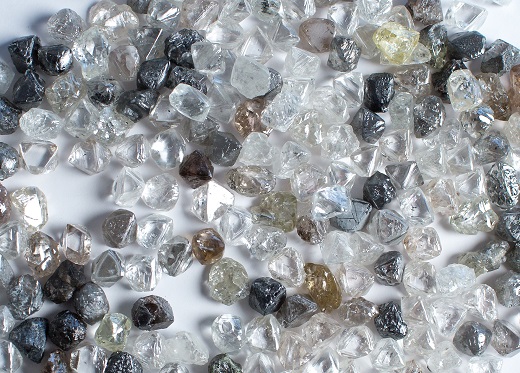 Diamond is the hardest known natural material on both the Vickers scale and the Mohs scale. Diamond's great hardness relative to other materials has been known since ancient times and is the source of its name. The name diamond is derived from the ancient Greek adámas which translates to "unalterable", "unbreakable" or “unconquerable.”

Diamonds are thought to have been first recognized and mined in India, where significant alluvial deposits of the stone could be found many centuries ago along the rivers Penner, Krishna and Godavari. Diamonds have been known in India for at least 3,000 years.

The largest diamond ever to be discovered is the Cullinan diamond which weighed an incredible 3106 carats, a total weight of 1.33 pounds. It was discovered in South Africa in 1905 and was given to King Edward. It eventually was cut into 9 diamonds that make up the crown jewels. The largest of them, the Cullinan I, or the Great Star of Africa, is a pendeloque-cut brilliant (pear shape) weighing 530.2 carats (106.04 g) and has 74 facets.It is set at the top of the Sovereign's Sceptre with Cross which had to be redesigned in 1910 to accommodate it. (Pictured top center of Image 3) 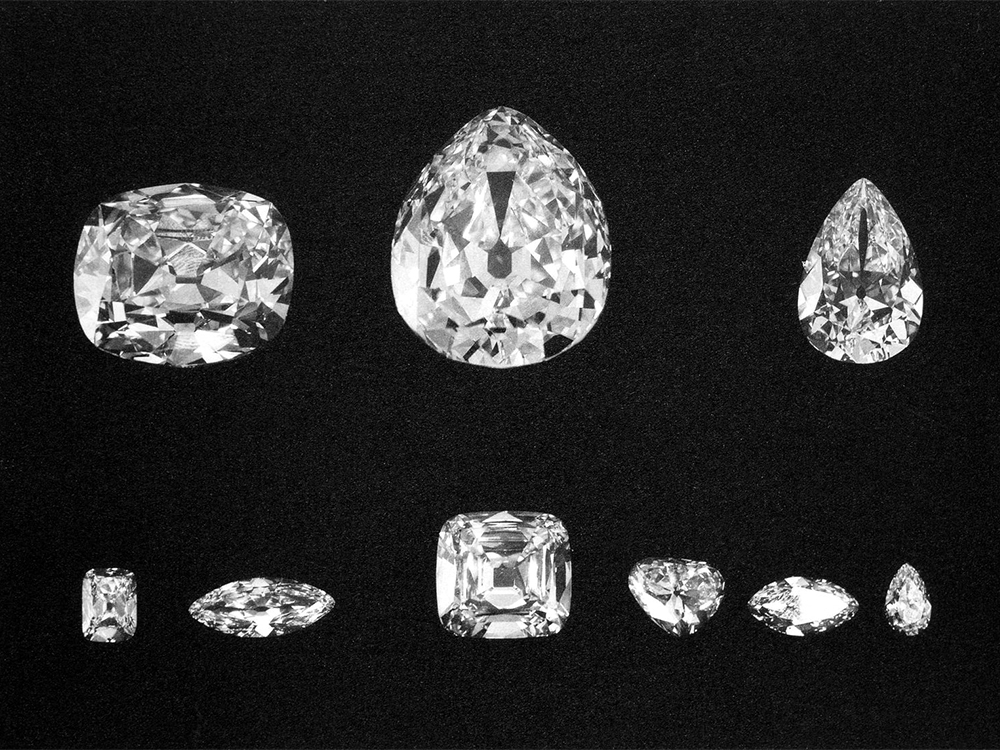 Diamonds occur in a variety of colours—steel gray, white, blue, yellow, orange, red, green, pink to purple, brown, and black. The slightest little bit of gases in the formation creates a coloured diamond: a bit of boron makes a blue diamond; nitrogen makes a yellow diamond; natural radiation from nearby rocks trap electrons to create a green surface colour; pink or red shades are thought to be due to changes to the electron structure during the voyage to the earth’s surface. Pictured below is a fancy vivid green diamond surrounded by round brilliant cut pink diamonds. 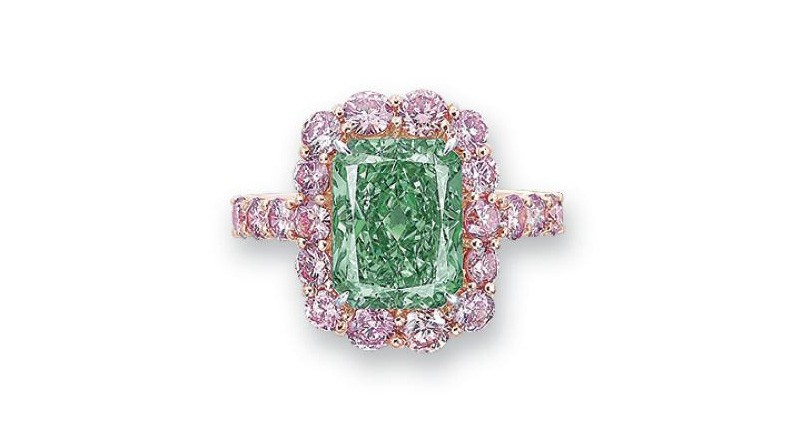 Pure diamonds are perfectly transparent and colourless and graded as a ‘D’ colour on the grading scale. The scale ranges from ‘D’, being completely colourless to ‘Z’, which is a yellow colour. The price decreases as the colour gets closer to ‘Z’ on the scale. If a diamond is beyond the ‘Z’ colour on the scale, then it gets classified as a fancy yellow diamond.